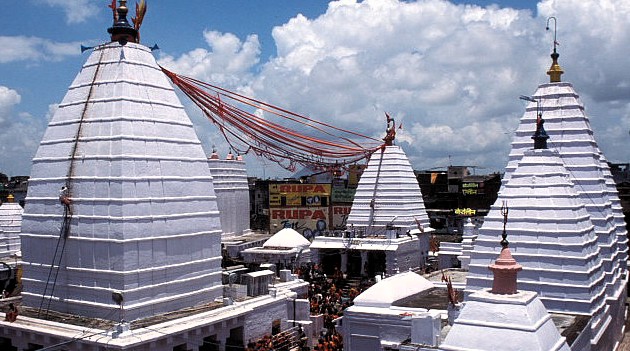 Baba baidyanath temple, also known as Baba dham and Baidyanath dham is one of the twelve Jyotirlingas, the most sacred abodes of Shiva. It is located in Deoghar in the Santhal Parganas division of the state of Jharkhand, India. It is a temple complex consisting of the main temple of Baba Baidyanath, where the Jyotirlinga is installed, and 21 other temples.

According to Hindu beliefs, the demon king Ravana worshipped Shiva at the current site of the temple to get the boons that he later used to wreak havoc in the world. Ravana offered his ten heads one after the another to Shiva as a sacrifice. Pleased with this, Shiva descended to cure Ravana who was injured. As he acted as a doctor, he is referred to as Vaidhya (“doctor”). From this aspect of Shiva, the temple derives its name.

There are 22 temples in the same campus of different Gods and Goddesses among which Lord Shiva is empowered as being supreme. Modern concepts ascribe that the shrines are of both old and new styles. The temple of Shiva, Baidyanath faces the east, and is 72 feet tall, and it is lotus shaped. According to religious belief this temple has been built by Vishwakarma, the architect of gods. There are three parts of this temple; i.e., the main temple, the middle part of the main temple, and the entrance part of the main temple. The main temple is beyond historical dates. It has been visited since the age of Rama, the king of Ayodhya. The top contains three ascending shaped gold vessels that are compactly set, which were donated by Maharaja of Gidhaur, Raja Puran Singh. Besides these pitcher shaped vessels, there is a ‘PUNCHSULA’ (Five knives in Tridenta shape), which is rare. In the inner top there is an eight petaled lotus jewel (CHANDRAKANTA MANI). The main ‘LINGAM’ (Lord Shiva) is also very rare. To the east of the northern verandah of the temple there is a large vat into which flows the water and milk offered as ablution. The lingam is of a cylindrical form about 5 inches in diameter and projects about 4 inches from the center of a large slab of basalt. It is not possible to ascertain how much of the lingam is buried. The top is broken and has uneven surface. There are different porches in the temple. One porch leads to the cell where the lingam is fixed. The second porch is in front with a row of pillars spanned by blocks of basalt and on the right side there is a sandstone image of a bull. There are bells fixed in the ceiling and pilgrims are supposed to pull the bell-ropes to announce their approach to the divinity. The courtyard has eleven other temples, mainly of Maa Parvathi, Maa Kali, Maa Jagat Janani, Kal Bhairav and Lakshminarayan. Maa parvathi temple is tied up with the main temple, with huge red sacred threads which is unique and worthy of reverence, showing the unity of Shiva and Shakti.

Nearest rail way station is Jasidih railway station, which is 7 km from Vaidyanath temple. Jasidh is 311 km from Howrah/Sealdah on Patna route. On a normal day, the worshipping of Baidyanath Jyotirlingam begins at 4 AM. The temple doors open at this time. During 4:00am to 5:30 am, the Head priest worships with Shodashopachar. Locals also call it Sarkari Pooja. Then the devotees begin their worship of the Shivalinga. The most interesting tradition is that priests of the temple pour kuchcha Jal upon the lingam first, and later on the pilgrims pour water and offer flowers and Bilva leaf, upon the lingam. The Puja rituals continue till 3.30 PM. After this the temple doors are closed. In the evening at 6 PM the doors are opened again for devotees/ pilgrims and the process of worshipping begins again. At this time Shringar Puja takes place. The temple closes at 9:00 pm on the normal day, but during Holy Shravan month, the timings are extended. Unlike Somnath or Rameshwaram or Srisailam, here the devotees can get satisfaction by offering Abhishek themselves on Jyotirlinga. The pandas who perform different poojans for devotees are very important persons. They have a union called Dharmarakshini Sabha. The devotee can also buy Peda as prasad from Babadham. Peda is a local speciality of Deoghar. Babadham has a regular and well maintained office to accept offerings and donations.

The Matsyapuran narrates the place as Arogya Baidyanathitee, the holy place where Shakti lives and assists Shiva in freeing people from incurable diseases. The Madan Madhavi, a manuscript preserved in the archives of Maharaja of Gidhaur, provides information related to the political and cultural history of Gidhaur Raj. It includes a description of Babadham as well. This whole area of Deoghar was under the rule of the Kings of Gidhaur who were much attached with this temple. Raja Bir Vikram Singh founded this princely state in 1266. In 1757 after the Battle of Plassey the officers of the East India Company paid their attention to this temple. An English man, Keating was sent to look at the administration of the temple. Mr. Keating, the first English collector of Birbhum, took interest in the administration of the temple. In 1788, under Mr. Keating’s order Mr. Hesilrigg, his assistant, who was probably the first English man to visit the holy city, set out to supervise personally the collection of the pilgrim offerings and dues. Later, when Mr. Keating himself visited Babadham, he was convinced and forced to abandon his policy of direct interference. He handed over the full control of the Baba baidyanath temple to the hands of the high priest.