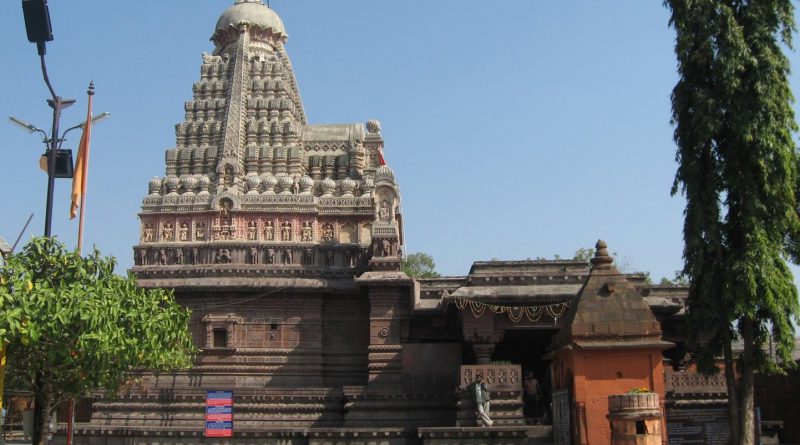 The temple stands as an illustration of the pre-historic temple traditions as well as of the pre-historic architectural style and structure. The inscriptions on the temples are a source of much attraction to ardent travellers. The temple, built of red rocks, is composed of a five tier shikara. Restored in the 18th century by Ahilyabai Holkar, the temple is 240 x 185 feet tall. It houses beautiful carvings and sculptures of many Indian Gods and Goddesses. Holy water is known to spring from inside the temple.

The very devout Shiva devotee, Ghushma(The Patel or chief of Verul) once found a treasure hidden in the snake pit (ant hill) by the grace of Lord Grishneshwar. He spent that money to renovate the temple and built a lake in Shikharshinganapur. Later on, Goutamibal (Bayajabai) and Ahilyadevi Holkar renovated the Grishneshwar temple.[3] This 240 ft x 185 ft temple is still there strong and beautiful as ever. Halfway up the temple, Dashavataras are carved in red stone. These are beautiful to look at. There are also other beautiful statutes carved out. A court hall is built on 24 pillars. On these pillars there are wonderful carvings. The scenes and paintings are beautiful. The Garbhagriha measures 17 ft x 17 ft. The Lingamurty faces eastward. There is a gorgeous Nandikeshwara in the court hall. Ghrishneshwar Temple is a very revered temple, situated in the state of Maharashtra. It lies very near to the Buddhist caves of Ellora, only half a kilometer away, and serves as the abode of one of the 12 Jyotirlingas in India dedicated to Lord Shiva. Even the Ajanta Caves and Dulatabad town of Maharashtra are situated nearby. The temple, with exquisitely sculpted walls, was built under the patronage of Queen Ahilyabai Holkar, one of the rulers of the erstwhile state of Indore.